As an indication for the treatment of sequelae of conservative breast cancer surgery, fat transfer in the breast raises two questions: the efficiency of the procedure in terms of volume and curve, and its impact on both breast imaging and oncological evolution. From April 2005 to April 2009, our prospective study included ten consecutive patients. They underwent one-step lipostructure according to Coleman’s technique for the treatment of the sequelae of conservative surgery for breast cancer. We studied the patients’ overall treatment satisfaction graded from 0 to 10 at the first and third months, and 3 years post-intervention. Patients evaluated the rate of fat resorbed in their breast at 1, 3, and 9 months and 3 years post-intervention. They were submitted to mammary computed tomography (CT) scan before lipofilling and 3 and 9 months later and after 3 years in order to obtain an objective evaluation of fat resorption by a three-dimensional (3D) approach. All patients underwent mammography before lipofilling and 3 years after. The patients were asked if lipofilling had been a significant surgical procedure and if they would accept another one. We noticed that patients’ long-term satisfaction remained constantly good. Seventy percent were satisfied with the total treatment after 3 years. Average fat resorption values evaluated by the patients and by CT scan were quite close, which suggests a reliability of subjective patient evaluation. The experience of the average fat resorption shows that surgeons can repeat the procedure after 9 months thanks to the stabilization of fat resorption. Long term fat resorption after 3 years was estimated to be on average 44% on CT scan evaluation and 53% on patients; this confirms the usually agreed concept in clinical practice, which advises an overcorrection of 30 to 50% in order to offset for future fat resorption. All patients considered lipofilling to be a minimally invasive technique. We encountered no difficulty in patient follow-up post-lipofilling. Thanks to mammography, ultrasonography and RMI for suspect images, radiological follow-up allowed 90% of the cases to distinguish post-lipofilling images from radiological abnormality due to breast cancer. Lipofilling provides an elegant technique to treat the sequelae of conservative breast surgery. It is a less invasive technique that results in a high level of patient satisfaction and satisfactory follow-up attendance. Nevertheless this procedure may require further injections to obtain fully satisfying results. 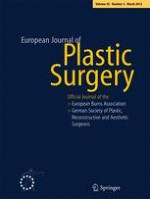 The use of tissue expander in the management of staged proximal hypospadias repair: report of case

The prune belly syndrome: report of a rare case and review of literature