Early onset of conduct disorder (CD) with callous-unemotional traits has been linked to low levels of dopamine β-hydroxylase (DβH), an enzyme involved in dopamine turnover. The C1021T polymorphism in the DβH gene is a major quantitative-trait locus, regulating the level of DβH. In this study of juvenile delinquents from Northern Russia (n = 180), the polymorphism at -1021 was associated neither with early-onset CD nor with psychopathic traits. Association was found between psychopathic traits and early-onset CD, ADHD and mania. 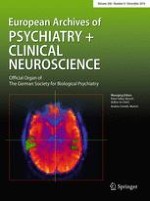 Remifentanil in electroconvulsive therapy: a systematic review and meta-analysis of randomized controlled trials

Regional differences in the expression of brain-derived neurotrophic factor (BDNF) pro-peptide, proBDNF and preproBDNF in the brain confer stress resilience

Erratum to: Further evidence for the association between a polymorphism in the promoter region of SLC6A3/DAT1 and ADHD: findings from a sample of adults