Podocalyxin-like protein (PODXL) is a cell surface transmembrane glycoprotein, the expression of which has been associated with poor prognosis in a range of malignancies. The aim of this study was to investigate the impact of PODXL expression on survival in esophageal and gastric adenocarcinoma.

The study cohort consists of a consecutive series of 174 patients with esophageal (including the gastroesophageal junction) or gastric adenocarcinoma, surgically treated between 2006 and 2010 and not subjected to neoadjuvant treatment. Immunohistochemical expression of PODXL was assessed in tissue microarrays with cores from primary tumors, lymph node metastases, intestinal metaplasia and adjacent normal epithelium. Survival analyses were performed on patients with no distant metastases and no macroscopic residual tumor. 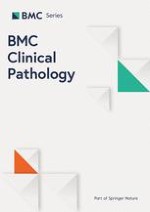 Uterine myometrial mature teratoma presenting as a uterine mass: a review of literature

Cellular angiofibroma of the vulva: a poorly known entity, a case report and literature review