Irritable bowel syndrome (IBS) is a symptom of functional gastrointestinal disorders. It is commonly experienced as abdominal cramp, diarrhea, and constipation. The diagnosis and treatment of IBS were mostly conducted by synthetic medicines including antispasmodic drugs that have many side effects and are so expensive. The aim of the present study was to explore the antispasmodic activity of Uvaria rufa Blume and Anomianthus dulcis (Dunal) J. Sinclair extracts on isolated rats’ ilia which later compared to atropine as reference drug. The ethanolic extracts from the stem of A. dulcis and U. rufa were investigated for their antispasmodic activities against acetylcholine-induced rats’ ilia contraction in vitro experiment. The results of this study showed that both ethanolic extracts of U. rufa and A. dulcis have an antispasmodic efficiency at all concentrations of 200, 300, 400, and 500 μg/ml on excised rats’ ilia. They produced the highest relaxation of 92.71 ± 5.97 and 98.53 ± 0.61% in A. dulcis and U. rufa extracts, respectively, while atropine produced 112.84 ± 5.61% at concentration of 10.0 μg/ml. These results suggest that U. rufa and A. dulcis could be used as antispasmodic agents for IBS treatment. 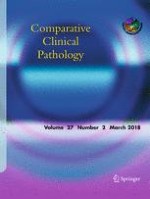 Preoxygenation and injectable anesthesia in dog: evaluation of maintenance and recovery periods of anesthesia and hemoglobin desaturation

Ectoparasitism on freshwater fish in West Azerbaijan, northwest of Iran