The online version of this article (doi:10.​1007/​s00406-012-0348-1) contains supplementary material, which is available to authorized users.
Ina Giegling and Beatrice Balzarro have contributed equally.

The present study explores whether ankyrin repeat and kinase domain containing 1 (ANKK1) and dopamine receptor D2 (DRD2) variants could predict efficacy and tolerability of haloperidol in the treatment of psychotic patients. We also attempted to replicate findings in a group of schizophrenic patients from the Clinical Antipsychotic Trials in Intervention Effectiveness (CATIE) study. Eighty-eight acutely psychotic patients were genotyped for 9 ANKK1 and 27 DRD2 SNPs. Treatment efficacy and tolerability were assessed using the Positive and Negative Symptoms Scale and the Udvalg for Kliniske Undersogelser side effects rating scales, respectively. Multivariate analyses were employed to test possible influences of single-nucleotide polymorphisms on clinical and safety variables. Analysis of haplotypes was also performed. Outcomes in the replication sample were response versus nonresponse and the presence versus absence of motor side effects at 1 month of treatment. rs2242592 within ANKK1 gene and rs1124493 within DRD2 gene were associated with clinical improvement (p = 0.008 and p = 0.001, respectively). Results were confirmed in the allelic analysis. Three haplotype blocks, one among ANKK1 and two among DRD2 gene were associated with better clinical improvement. Our results were not replicated in the CATIE sample, although rs11604671, which is in strong linkage disequilibrium with rs2242592, was associated with response in the replication sample. Our findings support a possible role of ANKK1 and DRD2 variability on haloperidol efficacy. However, due to the discrepancies between the results in the two samples, our results need further validation. 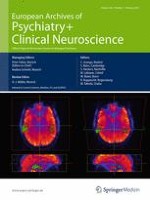 Cannabis abuse and brain morphology in schizophrenia: a review of the available evidence

Astrocyte decrease in the subgenual cingulate and callosal genu in schizophrenia