To assess these constructs, we examined Items 9 and 66 on the Teacher’s Report Form (TRF), which measure obsessions and compulsions, respectively. 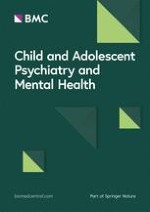 Distinct profiles of reactive and proactive aggression in adolescents: associations with cognitive and affective empathy

Self-reported frequency of sex as self-injury (SASI) in a national study of Swedish adolescents and association to sociodemographic factors, sexual behaviors, abuse and mental health

The role of self-esteem in the development of psychiatric problems: a three-year prospective study in a clinical sample of adolescents