Lightweight meshes (LWM) have shown benefits compared to heavyweight meshes (HWM) in terms of less postoperative pain and stiffness in open inguinal hernia repair. It appears to have similar advantages also in TEP, but concerns exist if it may be associated with higher recurrence rates. The aim of the study was to compare reoperation rate for recurrence of LWM to HWM in laparoscopic totally extra-peritoneal (TEP) repair.

All groin hernias operated on with TEP between 1 January 2005 and 31 December 2013 at surgical units participating in The Swedish Hernia Register were eligible. Data included clinically important hernia variables. Primary endpoint was reoperation for recurrence. Median follow-up time was 6.1 years (0–11.5) with minimum 2.5 years postoperatively.

Lightweight meshes were associated with an increased risk of reoperation for recurrence compared to HWM. While direct hernias and larger hernia defects may benefit from HWM to avoid increased recurrence rates, LWM is recommended to be used in indirect and smaller hernia defects in TEP repair.
Hinweise
Preliminary data were presented at the European Hernia Society Meeting 2017 in Vienna, Austria, and at the Swedish Surgical Society Meeting 2017 in Jönköping, Sweden.

Prosthetic reinforcement has become the standard treatment of groin hernias compared to suture repair, since it significantly reduces the risk of recurrence and chronic pain [1]. However, the first generations of meshes, commonly polypropylene and polyester, were associated with side effects such as pain and reduced abdominal wall compliance [2]. This has resulted in less foreign material in the development of modern meshes. The main properties of the mesh are found to be the type of filament, tensile strength, and porosity [3]. These can affect the weight of the mesh and its biocompability to the abdominal wall when it comes to flexibility and discomfort [3]. When decreasing the amount of polypropylene and increasing the pore size, less foreign body reaction is produced [4]. The so-called lightweight meshes (LWM) can, therefore, provide adequate strength for hernia repair with less associated side effects [5]. The previous studies have shown benefits of LWM compared to heavyweight meshes (HWM) in terms of improved aspects of pain, discomfort, and early return to normal activity after surgery in open anterior mesh groin hernia repair (Lichtenstein) [6, 7]. LWM appears to have similar advantages in laparoscopic totally extra-peritoneal repair (TEP), as well [8]. However, concerns exist if it may have an increased risk of recurrence, especially for larger hernia defects [9, 10].
The aim of the study was to compare the reoperation for recurrence rate in a large number of hernias with long-term follow-up following the use of LWM versus standard HWM in TEP. The hypothesis was that LWM does not increase reoperation for recurrence rate compared to HWM.
Anzeige

The current study is a nationwide population-based register cohort that included all patients, 15 years or older, operated on with laparoscopic totally extra-peritoneal repair (TEP) between 1 January 2005 and 31 December 2013 at surgical units participating in The Swedish Hernia Register (SHR). The follow-up time was until 30 June 2016. Approval of the study protocol was obtained 22 June 2016 by the Regional Ethics Review Board in Stockholm, Sweden (DNR 2016/1144-31/2). Only aggregated data were collected without any accesses to sensitive information.

SHR was established in 1992 in eight Swedish hospitals and has gradually expanded. Currently, nearly 100% of all groin hernia repairs from over 90 units are registered. A total number of more than 350,000 operations have been registered [11, 12]. The SHR is a prospective voluntary register in which the patients are recorded with a personal identity number (PIN), unique for each citizen in Sweden. This allows linking with the previous hernia repairs registered in the SHR. Data include patient characteristics, type of hernia, size of the hernia defect, type of repair, type of mesh, operation time, complications within 30 days, and reoperations. The SHR is validated and 10% of the aligned units are checked independently every year. It is also connected to The Migration and The Cause of Death registers in Sweden.

Descriptive statistics were used to describe baseline characteristics. Median values with range were given. Reoperation rates were illustrated using Kaplan–Meier hazards plots to assess the analysis of time from the TEP repair to reoperation for recurrence. Relative risks were estimated using Cox’s proportional hazards model. First, univariate analysis of risk co-variables was calculated. All variables from the univariate model were then selected for the multivariate analysis (stratified for sex and type of hernia) to assess independent risk factors. In addition, a subgroup analysis was made for the meshes against risk co-variables. Confidence intervals (CI) at 95% were calculated. Statistical significance was considered at a P value < 0.05. All analyses were performed using R Core Team 2017 with survival and ggplot2 packages (Version 3.4.1. R: A language and environment for statistical computing. R Foundation for Statistical Computing, Vienna, Austria. URL https://​www.​R-project.​org/​). Cox.zph was calculated to exclude time-depended co-variates.

A total of 17,348 groin hernia repairs were operated on with TEP during the 9-year inclusion period. After exclusion, 13,839 repairs remained for statistical analysis. A total number of 491 hernias were re-operated for recurrence. The overall follow-up time in the study material was 11.5 years with a minimum of 2.5 years postoperatively. The median follow-up time for all hernias was 6.1 years. 61.5% of the reoperations were performed within 2 years after the TEP operation. The overall cumulative reoperation rate in the material was 3.5% Kaplan–Meier analysis of time from the TEP repair to reoperation for recurrence of the meshes which are illustrated in Fig. 2a. Hernia characteristics in the total and reoperation group are given in Table 1.
×
Table 1
Baseline hernia characteristics in each mesh group
Values in parentheses are in percentage unless indicated otherwise
NA unknown/missing, HWM heavyweight meshes, LWM lightweight meshes, ASA class American Society of Anesthesiologists classification
aAge are given in median with range

The multivariate analysis showed that recurrences were more frequent in the older half of the study population (patients ≥ 59 years), than in the younger half (patients < 59 years) (Fig. 2b; Table 2). However, the disparity in reoperations rate for recurrence between the meshes was more evident in the younger half (Table 3).
Table 3
Subgroup Cox’s proportional hazard ratio analysis of reoperation for recurrence
Values in parentheses are 95% confidence intervals. HWM, reference. Women were excluded in all subgroup analyses. Age is divided by median. Significant P values are in bold face

In direct male hernias, the reoperation for recurrence rate was significantly higher in LWM than in HWM (Fig. 2c; Table 3). However, the dissimilarity between LWM and HWM was most apparent in the younger half (< 59 years) (Fig. 2d; Table 3). In indirect male hernia repairs, the reoperation for recurrence rate was more similar between the meshes (Table 3).

Approval of the study protocol was obtained 22 June 2016 by the Regional Ethics Review Board in Stockholm, Sweden (DNR 2016/1144-31/2). Only aggregated data were collected without any accesses to sensitive information.

All procedures performed in the study involving human participants were in accordance with the ethical standards of the institutional and/or national research committee and with the 1964 Helsinki declaration and its later amendments or comparable ethical standards. This article does not contain any studies with animals performed by any of the authors. 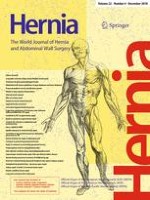 Correction to: Causes of recurrence in laparoscopic inguinal hernia repair

Ventral hernia recurrence in women of childbearing age: a systematic review and meta-analysis

Laparoscopic ventral hernia repair with and without defect closure: comparative analysis of a single-institution experience with 783 patients