Previous multicenter randomized trials demonstrated that omitting mechanical bowel preparation (MBP) did not increase anastomotic leakage rates or other infectious complications. However, the most serious concern regarding the omission of MBP is ongoing fecal peritonitis after anastomotic leakage occurs. The aim of this study was to compare the clinical manifestations and severity of anastomotic leakage between patients who underwent MBP and those who did not.

This study was a single-center retrospective review of a prospectively maintained database. From January 2006 to September 2013, 1369 patients who underwent elective rectal cancer resection with primary anastomosis were identified and analyzed.

Anastomotic leakage rates were not significantly different between patients who did not undergo MBP (77/831, 9.27%) and those who did (42/538, 7.81%). However, a significantly lower rate of clinical leakage requiring surgical exploration was observed in the leakage without MBP group (30/77, 39.0%) compared with the leakage with MBP group (30/42, 71.4%) (P = 0.001). There were no significant differences in the clinical severity of anastomotic leakage as assessed by the length of hospital stay, time to resuming a normal diet, length of antibiotic use, ileus rate, transfusion rate, ICU admission rate, and mortality rate between the leakage without MBP and leakage with MBP groups.

MBP was not found to affect the clinical severity of anastomotic leakage in elective rectal cancer surgery. 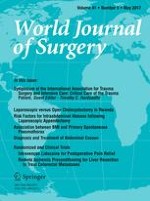 A Comparative Study of Outcomes Between Single-Site Robotic and Multi-port Laparoscopic Cholecystectomy: An Experience from a Tertiary Care Center

A Multispecialty Evaluation of Thiel Cadavers for Surgical Training