Understanding on the clinical features and neural mechanisms leading to cognitive impairment and dementia in Parkinson’s disease (PD) has notably increased. At time of diagnosis, nearly all PD patients present some degree of cognitive impairment not enough severe as to significantly affect functional independence. However, even mild cognitive changes have a measurable impact to functional capacity in PD. A clinically practical differentiation is based on the importance of executive deficits in the early phases of cognitive impairment in PD and on the evidence stressing the transitional role of posterior–cortical impairment on the progression of PD-MCI to dementia. However, the pattern of cognitive impairment in PD is variable not just to the extents on which are the affected cognitive domains, but also on which are those domains that became affected first. Specific diagnostic criteria for mild cognitive impairment associated with PD (PD-MCI) and dementia (PDD) and operative guidelines for the cognitive assessment have been developed. In the present review, we will describe general notions regarding the mechanisms and the profile of cognitive deterioration in PD, the diagnostic criteria for PD-MCI, and some of the currently recommended assessment approaches. 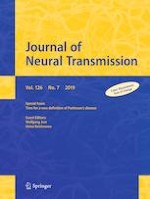 Management of delirium in Parkinson’s disease