Squamous odontogenic tumor (SOT) is a rare benign epithelial odontogenic neoplasm of the jaws. Both intraosseous and peripheral SOTs have been described in the English language literature. While most intraosseous SOTs occur as solitary lesions, a multicentric variant has also been previously described. Although the radiographic and microscopic features are identical for both solitary and multicentric clinical presentations, there are three significant differences between them. More specifically, multicentric SOT presents at an earlier age (third decade of life), has a slightly higher male to female ratio than the solitary type and has a marked predilection for African–Americans. Here we document the eighth reported case of multicentric SOT, which was diagnosed in a 43-year-old African–American male. In addition, we feature focal sebaceous metaplasia, a heretofore unknown microscopic feature of SOT. Clinical, radiological, and histopathological findings are discussed. The differential diagnosis, biological behavior and management modalities for SOT are also addressed. 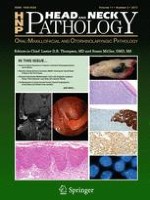 Anaplastic Transformation of Papillary Thyroid Carcinoma Only Seen in Pleural Metastasis: A Case Report with Review of the Literature