Various case reports on nasal myiasis written during the 1990s and 2000s state that nasal myiasis, which is known as peenash among South Asian natives, is a form of divine punishment in Hindu mythology, but do not provide citations from Hindu scriptures that would suggest this interpretation. This paper aims to discuss the phenomenon of peenash in a historical context by examining medical literature written during the nineteenth and early twentieth centuries, to identify Hindu texts contributing to the belief of some Hindus that nasal myiasis is a form of divine punishment, and to provide an overview of contemporary treatment for and management of nasal myiasis. 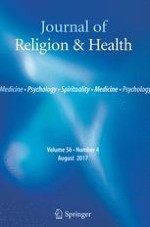 “One Big Family”: Pastoral Care and Treatment Seeking in an Egyptian Coptic Church in England

Spirituality and Religiosity and Its Role in Health and Diseases

Embracing Ritual Healing: The Case of Sazuke in Tenrikyo in Contemporary Taiwan