The online version of this article (https://​doi.​org/​10.​1007/​s12282-018-0844-x) contains supplementary material, which is available to authorized users.
Jia-Ming Zhang and Kai Wei contributed equally to this work.

Octamer-binding transcription factor 4 (OCT4) and SRY (sex determining region Y)-box 2 (SOX2) are common biomarkers of cancer stem cells, which contribute to the pathological processes of several carcinomas, while little is known about the effects of OCT4 and SOX2 on the prognosis of triple-negative breast cancer (TNBC). The purpose was to evaluate the correlation of tumor tissue OCT4 and SOX2 expressions with clinicopathological features and overall survival (OS) in surgical TNBC patients.

127 surgical patients with TNBC were enrolled in this cohort study. Tumor tissue samples were obtained during the operation. OCT4 and SOX2 expressions were assessed by immunofluorescent staining.

Tumor tissue OCT4 but not SOX2 expression was positively correlated with histologic grade, pathological tumor size, N stage and TNM stage, and it could be served as an independent biomarker to predict worse prognosis in surgical patients with TNBC. 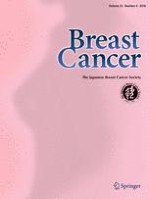 Do you know how to get the J-START quality assurance guideline?