Many countries belonging to the Organisation for Economic Co-operation and Development (OECD) have seen a considerable increase in the number of disability benefits recipients (DBRs), in addition to an increase in the proportion of people with mental illness. As in other countries, changes to the welfare benefits system in England were made in order to reduce the number of DBRs. Many people lost their benefit payments, although a considerable number had them reinstated after appeal. Our aim was to investigate the impact of the process on DBRs whose disability was related to mental health and who won their appeal. Seventeen DBRs were interviewed. The participants reported three main types of impact. Beyond the practical reduction of income and the related anxiety, interviewees reported considerable stress when coping with the ‘never-ending’ cycle of bureaucracy. They also expressed anger, frustration and demoralisation at mistrust on the part of the authorities partly due to the ‘invisibility’ of their disability. 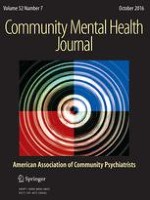 Mental Health Care Providers’ Views of Their Work with Consumers and Their Reports of Recovery-Orientation, Job Satisfaction, and Personal Growth

A Mixed-Methods Study of the Recovery Concept, “A Meaningful Day,” in Community Mental Health Services for Individuals with Serious Mental Illnesses