Introduction of effective neoadjuvant therapy for pancreas cancer has resulted in complex and aggressive operations involving vasculature resection. This results in complicated postoperative CT appearance of vasculature, which in addition to high rate of recurrence makes interpretation of imaging difficult. The aim of this study was to identify patterns of postoperative appearance of portal vein-superior mesenteric vein complex (PV-SMV).

A retrospective study was conducted on patients undergoing pancreaticoduodenectomy with PV-SMV resection and reconstruction (PVR) between 2004 and 2014. Clinicopathological data were collected from a prospectively maintained database. Postoperative CT scans were reviewed to identify patterns of venous and perivenous features.

This is a novel study that identifies and categorizes postoperative features of PV-SMV after PVR. These features overlap with those of disease recurrence and their better understanding can results in an accurate interpretation of postoperative imaging. 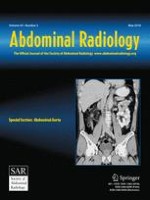 The bottom line: MRI and CT findings of unusual rectal and perirectal pathology