The concept of synergistic mechanisms as the pathophysiologic basis of hepatic encephalopathy started with the pioneering work of Les Zieve in Minneapolis some 60 years ago where synergistic actions of the liver-derived toxins ammonia, methanethiol, and octanoic acid were described. More recently, synergistic actions of ammonia and manganese, a toxic metal that is normally eliminated via the hepatobiliary route and shown to accumulate in brain in liver failure, on the glutamatergic neurotransmitter system were described. The current upsurge of interest in brain inflammation (neuroinflammation) in relation to the CNS complications of liver failure has added a third dimension to the synergy debate. The combined actions of ammonia, manganese and pro-inflammatory cytokines in brain in liver failure result in oxidative/nitrosative stress resulting from activation of glutamate (NMDA) receptors and consequent nitration of key brain proteins. One such protein, glutamine synthetase, the sole enzyme responsible for brain ammonia removal is nitrated and inactivated in brain in liver failure. Consequently, brain ammonia levels increase disproportionately resulting in alterations of brain excitability, impaired brain energy metabolism, encephalopathy and brain swelling. Experimental therapeutic approaches for which proof-of-principle has been established include the NMDA receptor antagonist memantine, N-acetyl cysteine (recently shown to have antioxidant properties at both hepatic and cerebral levels) and probiotics. 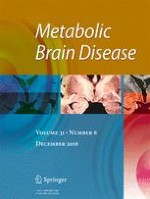 The concept of “the inflamed brain” in acute liver failure: mechanisms and new therapeutic opportunities