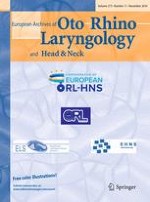 Reply to the letter to the editor ‘‘in response to: a better design is needed for clinical studies of chronic tympanic membrane perforations using biological materials’’ 10.1007/s00405-016-4019-0

Dizziness and vestibular function before and after cochlear implantation