Psychotic experiences (PEs) are not exclusive to psychotic disorders and highly correlated with mood episodes. In this representative general population-based study, longitudinal bidirectional associations between the extended psychosis phenotype and mood episodes were investigated, accounting for other possible causes.

Households were contacted in a multistage clustered probability sampling frame covering 11 districts and 302 neighbourhoods at baseline (n = 4011) and at 6-year follow-up (n = 2185). Participants were interviewed with the relevant sections of the composite international diagnostic interview both at baseline and at follow-up. Sociodemographic, familial and environmental risk factors associated with the extended psychosis phenotype and mood episodes were assessed. Logistic regression and cross-lagged panel correlation models were used for the associations between the extended psychosis phenotype and mood episodes.

The sub-additive bidirectional associations between PEs and mood episodes over time and the similarity of cross-lagged correlations are suggestive of mutually causal connections between affective and psychotic domains of psychopathology. 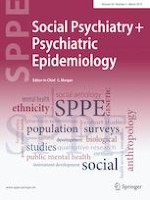 Positive and negative impacts of schizophrenia on family caregivers: a systematic review and qualitative meta-summary

Prenatal war exposure and schizophrenia in adulthood: evidence from the Sino-Japanese War of 1937–1945

A comparison of neurocognition and functioning in first episode psychosis populations: do research samples reflect the real world?

Association between psychotic experiences and non-accidental self-injury: results from a nationally representative survey of adolescents