The online version of this article (https://​doi.​org/​10.​1007/​s11695-018-3493-4) contains supplementary material, which is available to authorized users.
Daniel Castaneda and Violeta B. Popov contributed equally to this work.

Bariatric surgery is endorsed by multiple societies as the most effective treatment for obesity. Psychosocial functioning has also been noted to improve for most patients after bariatric surgery. However, some studies have shown an increase in post-operative suicide risk. The aim of this study was to review the published literature and evaluate the association of bariatric surgery with suicide events and suicide/self-harm attempts in patients who have undergone weight loss surgery.

MEDLINE and Embase were searched from inception through January 2018 for retrospective or prospective studies reporting mortality outcomes and self-harm or suicide rates after bariatric procedures. The primary outcome was the pooled event rate with 95% confidence interval (95% CI) for suicide. Secondary outcomes were suicide/self-harm attempts after bariatric surgery compared to same population prior to surgery and to matched control subjects, with the respective calculated odds ratios (OR) and 95% CI. 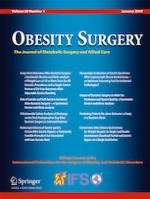 What Is the Current Evidence to Define the Length of the Alimentary Limb in the Laparoscopic Gastric Bypass Technique?

Comprehensive Assessment of the Effects of Sleeve Gastrectomy on Glucose, Lipid, and Amino Acid Metabolism in Asian Individuals with Morbid Obesity

Response to “Reproductive Function Abnormalities and Bariatric Surgery: is a Matter of Time?”

Letter to the Editor: Regarding The Evaluation of Screening Questionnaires for Obstructive Sleep Apnea to Identify High-Risk Obese Patients Undergoing Bariatric Surgery