The aim of the present study was to explore the role of intermediate-conductance Ca2+-activated K+ (SK4) in atrial fibrillation (AF) inducibility in canines with rapid atrial pacing.

Eighteen dogs were divided into the control group, the pacing group and the stellate ganglion ablation (SGA) + pacing group. In the pacing group, dogs were subjected to rapid atrial pacing, and the atrial effective refractory period (AERP) and AF inducibility were measured. After cessation of 7-h pacing, SK4 inhibitor (TRAM-34) was administered. After SGA, the SGA + pacing group received the same procedure of pacing and electrophysiological measurement as the pacing group. The expression of SK4 was measured in the left atrium (LA) and the right atrium (RA) in the three groups. 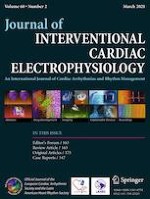