For severely mentally ill (SMI) users, continuity of care requires consistency between the supports provided by the members of their social support network. However, we know little about their network cohesion and its association with continuity of care. We set out to investigate this association and hypothesised that it would depend on the severity of the user’s situation and on his/her living arrangements.

We conducted face-to-face interviews with 380 SMI users recruited in outpatient and inpatient mental health services in three areas in Belgium. Data regarding users’ social networks were collected using an ego-network mapping technique and analysed with social network analysis. The cohesion indicators were density (frequency of connections between network members), centralisation (having a small number of central people), and egobetweenness (the user’s centrality in his/her own network). Participants’ perception of continuity of care was measured by the Alberta Continuity of Services Scale.

Satisfactory continuity of care requires fewer professionals or services in a user’s network and a dense network for users with the most severe problems. This implies that those providing care must not only be able to increase cohesion within a network, but also to adapt their interventions to support the transition to a different, individualised network structure when severity decreases. 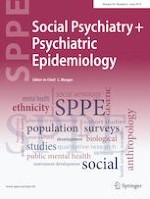 ADHD and depressive symptoms in adolescents: the role of community violence exposure

What drives changes in institutionalised mental health care? A qualitative study of the perspectives of professional experts