To evaluate the effect of a new-generation positional device, the sleep position trainer (SPT), in non-apneic position-dependent snorers.

Non-apneic position-dependent snorers with an apnea–hypopnea index (AHI) < 5 events/h were included between February 2015 and September 2016. After inclusion, study subjects used the SPT at home for 6 weeks. The Snore Outcome Survey (SOS) was filled out by the subjects at baseline and after 6 weeks, and at the same time, the Spouse/Bed Partner Survey (SBPS) was filled out by their bed partners.

Results of this study indicate that positional therapy with the SPT improved several snoring-related outcome measures in non-apneic position-dependent snorers. The results of this non-controlled study demonstrate that this SPT could be considered as an alternative therapeutic option to improve sleep-related health status of snorers and their bed partners. 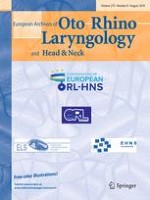 Early effects of irradiation on laryngeal mucosa in a gastroesophageal reflux model: an experimental study

Analysis of dysphagia in advanced-stage head-and-neck cancer patients: impact on quality of life and development of a preventive swallowing treatment