The association between systemic glucocorticoid therapy and the risk of infection in patients with rheumatoid arthritis: systematic review and meta-analyses | springermedizin.de Skip to main content
TOOLBAR 1 2 3 4
SUCHE MENÜ 1 2 3 4

The online version of this article (doi:10.​1186/​ar3453) contains supplementary material, which is available to authorized users.

All authors jointly conceived the study. WGD generated the search strategy and performed the initial abstract screening. WGD and MH independently reviewed the 430 full-text articles. WGD performed the data extraction and meta-analysis. All authors helped to draft the manuscript and read and approved the final manuscript.

Infection is a major cause of morbidity and mortality in patients with rheumatoid arthritis (RA). The objective of this study was to perform a systematic review and meta-analysis of the effect of glucocorticoid (GC) therapy on the risk of infection in patients with RA.

A systematic review was conducted by using MEDLINE, EMBASE, CINAHL, and the Cochrane Central Register of Controlled Trials database to January 2010 to identify studies among populations of patients with RA that reported a comparison of infection incidence between patients treated with GC therapy and patients not exposed to GC therapy.

In total, 21 randomised controlled trials (RCTs) and 42 observational studies were included. In the RCTs, GC therapy was not associated with a risk of infection (relative risk (RR), 0.97 (95% CI, 0.69, 1.36)). Small numbers of events in the RCTs meant that a clinically important increased or decreased risk could not be ruled out. The observational studies generated a RR of 1.67 (1.49, 1.87), although significant heterogeneity was present. The increased risk (and heterogeneity) persisted when analyses were stratified by varying definitions of exposure, outcome, and adjustment for confounders. A positive dose-response effect was seen. 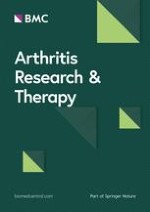 Positive regulators of osteoclastogenesis and bone resorption in rheumatoid arthritis