Septorhinoplasty is performed in combination with septoplasty and rhinoplasty operations and is characterized by severe postoperative pain. The aim of this study is to evaluate preemptive effects of intravenous (IV) ibuprofen and IV paracetamol on opioid consumption and pain scores after open septorhinoplasty.

This study has indicated that ibuprofen has more analgesic effect than paracetamol during first 12 h, but there is a non-inferiority between ibuprofen and paracetamol after first 12 h. 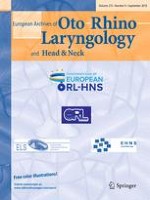 Effect of the temperature of nasal lavages on mucociliary clearance: a randomised controlled trial

Impact of balloon laryngoplasty on management of acute subglottic stenosis

Day case adenotonsillectomy for paediatric obstructive sleep apnoea: a review of the evidence