Although the coexistence of alopecia areata (AA) and systemic sclerosis (SSc) has been anecdotally reported, the association between these conditions has been poorly investigated. We aimed to assess the association between AA and SSc using a large-scale real-life computerized database. A cross-sectional study was conducted comparing the prevalence of SSc among patients with AA and among age-, sex-, and ethnicity-matched control subjects. Chi-square and t tests were used for univariate analysis, and logistic regression model was used for multivariate analysis. The study was performed utilizing the computerized database of Clalit Health Services ensuring 4.4 million subjects. A total of 51,561 patients with AA and 51,410 controls were included in the study. The prevalence of SSc was increased in patients with AA as compared with the control group (0.1% vs. 0.0%, respectively; OR, 2.30; 95% CI, 1.2–4.4; P = 0.010). The association was stronger among older and Jewish patients. In a multivariate analysis adjusting for sex, age, ethnicity, and other comorbidities, AA was still independently associated with SSc (OR, 2.3; 95% CI, 1.2–4.4; P = 0.012). In conclusion, a significant positive association was revealed between AA and SSc. Further studies are necessary to establish these findings in other study populations and to elucidate the mechanism underlying this association. Awareness of SSc may be of importance for physicians treating patients with AA, and screening for SSc in patients with relevant symptoms may be considered. 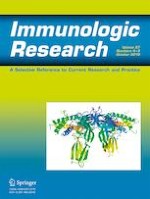 On the immunoregulatory role of statins in multiple sclerosis: the effects on Th17 cells

Personalized inherent randomness of the immune system is manifested by an individualized response to immune triggers and immunomodulatory therapies: a novel platform for designing personalized immunotherapies