From 52,906 AC index admissions, overall 30-day readmission rate was 21.48% without significant differences in the readmission rates across the study period. There was significant increase in the overall hospital charges for readmissions, while a significant reduction in the death rate was observed during the first readmission. Recurrent cholangitis (14%), septicemia (6.4%), and mechanical complication of bile duct prosthesis (3%) were the most common reasons for readmissions. The risk of readmission was significantly higher in patients with pancreatic neoplasm (OR 1.6, 95% CI 1.4–1.8), those who underwent percutaneous biliary procedures (OR 1.4, 95% CI 1.2–1.6), and who had an acute respiratory failure (OR 1.2, 95% CI 1.0–1.15). Other factors contributing to increased risk of readmissions included patients with Charleston comorbidity index > 3, diabetes, and length of stay > 3 days. Readmission risk was significantly lower in patients who underwent ERCP (OR 0.80, 95% CI 0.73–0.88) or cholecystectomy (OR 0.54, 95% CI 0.43–0.69).

AC is associated with a high 30-day readmission rate of over 21%. Patients with malignant biliary obstruction, increased comorbidities, and those who undergo percutaneous drainage rather than ERCP seem to be at the highest risk.
Anzeige 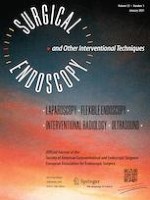 Correction to: The use of endoluminal techniques in the revision of primary bariatric surgery procedures: a systematic review