Benign inclusions, such as endosalpingiosis, in an axillary sentinel lymph node (SLN) can be misdiagnosed as metastatic breast carcinoma. However, endosalpingiosis is rare in lymph nodes above the diaphragm. Among 792 patients with breast carcinoma who underwent sentinel lymph node biopsy at our center, 2 patients have experienced benign glandular inclusions in 3 SLNs, and all of these glandular inclusions were lined with columnar and ciliated epithelial cells. Immunohistochemistry revealed that the epithelial cells were positive for Müllerian markers (e.g., PAX8 and WT-1) and negative for mammary markers (e.g., mammaglobin, GCDFP-15, and GATA3), which confirm the diagnosis of endosalpingiosis. The epithelial cells were positive for CK19 but the one-step nucleic acid amplification assay revealed negative results for the axillary SLNs. Although endosalpingiosis is rare in axillary SLNs, care is needed to identify these rare cases and avoid unnecessary axillary lymph node dissection, overstaging, and overtreatment. 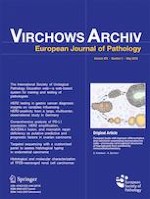 Morphologic spectrum of gluten-related disorders: how far to go?