The online version of this article (https://​doi.​org/​10.​1007/​s11748-019-01137-z) contains supplementary material, which is available to authorized users.
A part of the manuscript was presented at the 71th Annual Scientific Meeting of The Japanese Association for Thoracic Surgery.

Under general anesthesia, real-time navigation bronchoscopy was conducted using ENB to reach a site as close to the planned location as possible, and indigo carmine was injected. Initially, surgery was then performed (no-adjustment group; 5 lesions of 3 patients). Later, on-site adjustment was added before surgery (adjustment group; 4 lesions of 4 patients), in which the locational information of ENB was transferred to a radiology workstation to construct an adjusted three-dimensional image. The accuracy of each predicted marking location was graded based on intraoperative observation. After the analysis, 19 patients with 21 lesions underwent ENB VAL-MAP with on-site adjustment (practice set) to evaluate the surgical outcomes.

The accuracy of the predicted marking location was significantly higher in the adjustment than no-adjustment group (4.7 ± 0.7 vs. 3.4 ± 1.2, respectively; P = 0.01), especially among the markings for which the bronchoscope did not reach the planned location (4.5 ± 0.8 vs. 2.6 ± 0.5, respectively; P = 0.004). In the practice set, the lung map quality was satisfactory and the resection outcome was successful with a sufficient macroscopic resection margin in 19/21 lesions (90.5%). 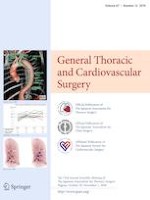