α-Pyrrolidinononanophenone (α-PNP) is a highly lipophilic synthetic cathinone (SC) that possesses a long hydrocarbon chain. It is considered that abuse of α-PNP and its derivatives causes serious health hazards, but there has been little evidence to date on the toxicological, pharmacological and pharmacokinetic properties. The purpose of this study was to elucidate the structure–toxicity relationship and the mechanism of neurocytotoxicity of α-PNP derivatives.

We synthesized three α-PNP derivatives [4′-fluoro, 4′-methoxy and 3′,4′-methylenedioxy substituents on the aromatic ring] and examined their toxicities against four human cells. The mechanism of 4′-fluoro-α-PNP (F-α-PNP)-induced neurocytotoxicity was investigated in terms of productions of reactive oxygen species (ROS) and reactive nitrogen species (RNS).

Cytotoxicites of α-PNP derivatives were augmented by the presence of 4′-fluoro or 3′,4′-methylenedioxy group on α-PNP, and F-α-PNP exhibited the most potent cytotoxicity. The F-α-PNP treatment resulted in ROS production, cytochrome-c release into cytosol, caspase-9 and caspase-3 activation and DNA fragmentation in neuronal SK-N-SH cells. In addition, subcellular fractionation analysis demonstrated that F-α-PNP is localized in the mitochondria as early as 12 h after the incubation. α-PNP derivatives increased level of nitric oxide (NO) and 3-nitrotyrosine adducts, indicative of peroxynitrite formation, in SK-N-SH cells. Pretreatment with a NO or peroxynitrite donor also exacerbated the cellular toxicity of F-α-PNP.

The presence of 4′-fluoro or 3′,4′-methylenedioxy group in the aromatic ring on SCs likely elevates the risk of occurrence of health hazards. Additionally, enhanced production of ROS and RNS plays central roles in neuronal cell apoptotic mechanism of F-α-PNP.
Anzeige 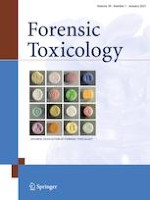