This study aimed to test radiographic projections of the posterior and anterior sides of the C4 vertebral body for age estimation in a cross-sectional sample of Turkish children and adolescents from the Baskent University Faculty of Dentistry. A sample of 232 x-rays from individuals aged between 5 and 15 years (101 boys and 131 girls) was analysed to investigate the correlation of age and changes in the projection ratio of the anterior and posterior sides of the body of the fourth cervical vertebra (Vba) in lateral cephalograms. The Normal Bayesian Calibration (NBC) model for age estimation was used to assess the relationship between Vba and age. The intra-observer repeatability and inter-observer agreement were 0.95 and 0.94, respectively. Age distribution gradually increased as Vba increased up to 14 years in both sexes. The difference between chronological and estimated ages did not increase with the increase in age. Calibration distributions of the dataset by the evaluation of Vba suggested mean absolute errors (MAEs) of 0.879 years and 0.906 years (mean interquartile ranges (MIQRs) 1.290 and 1.435 years)) in boys and girls, respectively. The biases of the estimates (βERR) were 0.013 and 0.027 for boys and girls, respectively. In conclusion, the NBC method on Vba variable appears to be suitable for age estimation in Turkish children and adolescents. 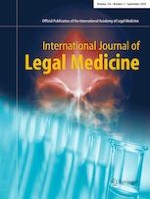 The adulterated XANAX pill: a fatal intoxication with etizolam and caffeine