The aim of present study was to reveal slip transfers related to flexor hallucis longus (FHL) and flexor digitorum longus (FDL) by dissection and to investigate detailed structure of chiasma plantare composed of FHL–FDL tendons and quadratus plantae (QP), with precise composition of the long flexor tendons of lesser toes by histological sections in human fetuses.

Slip transfers related to FHL and FDL tendons were identified and the related morphometric measurements were taken with dissection in 28 formalin-fixed fetuses (25–40 weeks). Composition and restoration of chiasma plantare and long flexor tendons of lesser toes were traced histological by analyzing movements of the tissues on the sequential coronal sections in five fetuses in the third trimester. The numbers of layers constituting chiasma plantare and the muscles that formed layers were specified. Each of two to five flexor tendons arising from the chiasma plantare was analyzed regarding its formation and contribution of FHL slip.

Slip transfers were found as FHL slip in 86% and cross-connections in 14%. The ratios of the slip width to that of FHL and FDL tendons were found higher than in adult literature. Variance in the involvement of slip to FDL and QP, formation and layering of chiasma plantare and formation of long flexor tendons from chiasma plantare were revealed and great similarities were found with data from dissection of adult in literature.

Slip transfers between FHL and FDL tendons, and layering properties of chiasma plantare were largely finalized during intrauterine period, while structural changes in slip seem to continue in the later stages of life, possibly by the effects of growth and usage of the extremity. In addition to individual variations, investigating the contribution of FHL slip, FDL and QP to long flexor tendons by different methods in literature is also suggested to be responsible for some diversities of our histological study. 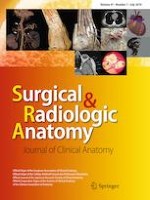 Anomalous anastomosis between the external carotid artery and vertebrobasilar artery via the hypoglossal canal: a case report and review of literature