Perianeurysmal edema and aneurysm wall enhancement are previously described phenomenon after coil embolization attributed to inflammatory reaction. We aimed to demonstrate the prevalence and natural course of these phenomena in unruptured aneurysms after endovascular treatment and to identify factors that contributed to their development.

We performed a retrospective analysis of consecutively treated unruptured aneurysms between January 2000 and December 2011. The presence and evolution of wall enhancement and perianeurysmal edema on MRI after endovascular treatment were analyzed. Variable factors were compared among aneurysms with and without edema. 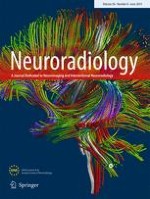