Periodontal diseases are a major public health problem affecting over half of the adult population worldwide. Lipopolysaccharide (LPS) produced by the periodontopathic bacterium Porphyromonas gingivalis induces the expression of inflammatory cytokines that promote inflammatory bone destruction. Mounting evidence supports that periodontal diseases are involved in the onset and progression of several systemic diseases, such as aspiration pneumonia and diabetes. Although treatment of periodontal diseases by removing the periodontopathic bacteria by brushing is a standard practice, it has limitations and is not effective in all cases. Therefore, a new method to replace or complement brushing is needed for the treatment of periodontal diseases. In this study, we investigated the anti-inflammatory effects of an extract from Cynara scolymus L. and its pharmacologically effective compound cynaropicrin, a sesquiterpene lactone, on human gingival fibroblasts (HGFs) stimulated by LPS and the potential anti-osteoclastogenic effects on RAW264.7 cells induced by receptor activator of NF-κB ligand (RANKL). We found that cynaropicrin inhibited IL-8 and IL-6 mRNA and protein synthesis in LPS-stimulated HGFs in a dose-dependent manner. P. gingivalis LPS-induced degradation of IκBα and phosphorylation of NF-κB p65 were also suppressed by cynaropicrin, as was LPS-stimulated NF-κB transactivation. Thus, cynaropicrin’s inhibition of P. gingivalis LPS-induced IL-8 and IL-6 expression may be due to the inhibition of the NF-κB pathway. Furthermore, we showed that cynaropicrin dramatically reduced RANKL-induced osteoclast differentiation. These results suggest that cynaropicrin may be useful for preventing periodontal diseases and could prove valuable in the development of more effective preventative approaches for periodontal diseases. 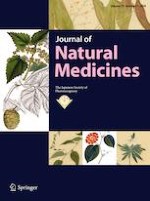 Identification of β-carboline and canthinone alkaloids as anti-inflammatory agents but with different inhibitory profile on the expression of iNOS and COX-2 in lipopolysaccharide-activated RAW 264.7 macrophages

Macrolide sesquiterpene pyridine alkaloids from the stems of Tripterygium regelii

Caryopincaolide M, a rearranged abietane diterpenoid with new skeleton and a new iridoid from Caryopteris incana