The motor deficit of the reeler mutants has largely been considered cerebellum related, and the developmental consequences of the cortex on reeler motor behavior have not been examined. We herein showed that there is a behavioral consequence to reeler mutation in models examined at cortex-dependent bimanual tasks that require forepaw dexterity. Using intracortical microstimulation, we found the forelimb representation in the motor cortex was significantly reduced in the reeler. The reeler cortex required a significantly higher current to evoke skeletal muscle movements, suggesting the cortical trans-synaptic propagation is disrupted. When the higher current was applied, the reeler motor representation was found preserved. To elucidate the influence of cerebellum atrophy and ataxia on the obtained results, the behavioral and neurophysiological findings in reeler mice were reproduced using the Disabled-1 (Dab1) cKO mice, in which the Reelin-Dab1 signal deficiency is confined to the cerebral cortex. The Dab1 cKO mice were further assessed at the single-pellet reach and retrieval task, displaying a lower number of successfully retrieved pellets. It suggests the abnormality confined to the cortex still reduced the dexterous motor performance. Although possible muscular dysfunction was reported in REELIN-deficient humans, the function of the reeler forelimb muscle examined by electromyography, morphology of neuromuscular junction and the expression level of choline acetyltransferase were normal. Our results suggest that the mammalian laminar structure is necessary for the forepaw skill performance and for trans-synaptic efficacy in the cortical output. 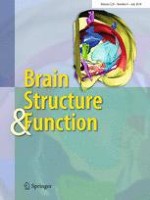 Neural substrates of fear-induced hypophagia in male and female rats

Correction to: Investigation of brain structure in the 1-month infant