Since its early beginnings in the 1950s, emergency medicine (EM) in the UK has come of age and has long been a recognized clinical specialty in its own right. The late 1990s and the early part of the millennium saw an expansion of the previously mainly surgical- and trauma-orientated workload of emergency departments (EDs) into a more and more acute medical and critical care case-mix with increasing levels of acuity and complexity. A recent national trainee survey conducted by the General Medical Council in 2010 revealed a trend towards above-average overall trainee satisfaction scores for core EM trainees. UK EDs operate with relatively fewer consultant whole-time equivalents than comparable EDs in North America and Australasia. As of April 2011 a revised Health Resource Group 4.0 tariff came into effect, and it is expected that most UK EDs will see an increase in income generation by up to 40% as a result of this. With the development of EM as a specialty, the primary care sector has progressively withdrawn from urgent and emergency care provision, although this trend has seen a slight reversal since the restructuring of general practice commissioning. Early data seem to suggest, however, that EDs are clinically safer, more effective and more cost-efficient when compared to primary care-run urgent care centres.
Anzeige 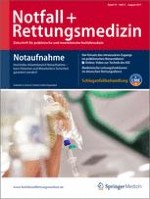 Qualitätsmanagement in der Notfallmedizin – „Out of the crisis“