The use of robotics in neurosurgery and, particularly, in stereotactic neurosurgery, is becoming more and more adopted because of the great advantages that it offers. Robotic manipulators easily allow to achieve great precision, reliability, and rapidity in the positioning of surgical instruments or devices in the brain. The aim of this work was to experimentally verify a fully automatic “no hands” surgical procedure. The integration of neuroimaging to data for planning the surgery, followed by application of new specific surgical tools, permitted the realization of a fully automated robotic implantation of leads in brain targets. An anthropomorphic commercial manipulator was utilized. In a preliminary phase, a software to plan surgery was developed, and the surgical tools were tested first during a simulation and then on a skull mock-up. In such a way, several tools were developed and tested, and the basis for an innovative surgical procedure arose. The final experimentation was carried out on anesthetized “large white” pigs. The determination of stereotactic parameters for the correct planning to reach the intended target was performed with the same technique currently employed in human stereotactic neurosurgery, and the robotic system revealed to be reliable and precise in reaching the target. The results of this work strengthen the possibility that a neurosurgeon may be substituted by a machine, and may represent the beginning of a new approach in the current clinical practice. Moreover, this possibility may have a great impact not only on stereotactic functional procedures but also on the entire domain of neurosurgery. 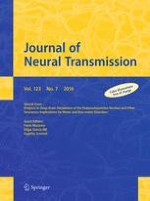 The primate pedunculopontine nucleus region: towards a dual role in locomotion and waking state

Structural and functional considerations of the cholinergic brainstem

Progress in deep brain stimulation of the pedunculopontine nucleus and other structures: implications for motor and non-motor disorders

The rationale for deep brain stimulation in Alzheimer’s disease

DBS in Tourette syndrome: where are we standing now?