The study was designed to explore the value of including positive lymph node count in the TNM staging system of non-small cell lung cancer.

It needs to be considered that N stage in combination with positive lymph node count may be used to predict the prognosis of non-small cell lung cancer for stage III cases with increased accuracy than category location-based stage. 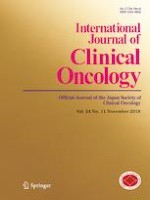 Impact of pathological stage and histological subtype on clinical outcome of adjuvant chemotherapy of paclitaxel plus carboplatin versus oral uracil–tegafur for non-small cell lung cancer: subanalysis of SLCG0401 trial