In spite of advancement of Orbscan 3, still there are wide agreement limits between CCT measurements obtained via Orbscan 3, Pentacam HR and ultrasound pachymetry; thus, interchangeable use in clinical practice is not recommended. 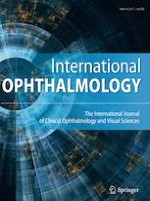 Assessment of the G-ROP study criteria for predicting retinopathy of prematurity: results from a tertiary centre in Turkey