Oncocytic sialolipoma is a very rare tumor of which only three cases have been reported. This entity is considered to be a variant of sialolipoma which harbours oncocytic nodules within a well-circumscribed lipomatous mass. We report a parotid mass in 73-year-old female that was difficult to diagnose in imaging and on biopsy. Ultrasonography and MRI demonstrated a mass with features thought to be consistent with lipoma. Twice needle core biopsies were performed. Both were indefinite for diagnosis. The first report favoured a lipoma and the second report suggested the lesion represented oncocytic hyperplasia or an oncocytoma. The microscopic examination of the excised surgical specimen demonstrated typical features of oncocytic sialolipoma, characterized by a predominately lipomatous component, sparse normal-appearing salivary gland tissue and multiple oncocytic nodules. This is the second case of oncocytic sialolipoma reported to occur in the parotid gland. 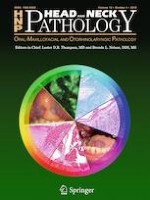 Demographic and Clinical Characteristics of 5294 Jaw Cysts: A Retrospective Study of 38 Years

Null Cell Adenoma of the Pituitary: Pseudo-rosettes Say It Best When Immunohistochemistry Says Nothing At All!