Treatment of pelvic arteriovenous malformations (AVMs) is frequently challenging because of the complex structures and anatomical diversity among cases. We present a case series of six patients with pelvic AVMs. All patients had a similar anatomical structure consisting of multiple feeders from the unilateral internal iliac artery, collecting into a dilated venous sac in the unilateral paravesical space and draining into a single outflow, eventually joining the pre-prostatic vein or internal iliac vein. Five among these patients were successfully treated by catheter-directed embolo-sclerotherapy. In addition to our six cases, we identified six previous case reports of pelvic AVM with similar anatomical characteristics. Herein, we summarize the clinical and anatomical features of these 12 paravesical AVM cases. In all cases, the patients were men; the AVM was predominantly located at the right paravesical space and demonstrated good therapeutic effect of catheter-directed embolosclerotherapy. These paravesical AVMs may constitute a new subgroup of pelvic vascular anomalies with the same etiology that are treatable by adequate catheter intervention. 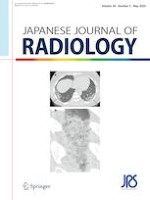 Correction to: The usefulness of full-iterative reconstruction algorithm for the visualization of cystic artery on CT angiography