Tobacco smoke contains a large number of compounds in the form of metals, volatile gases and insoluble particles, as well as nicotine, a highly addictive alkaloid. Marijuana is the most widely used illicit drug of abuse in the world, with a significant increase in the USA due to the increasing number of states that allow medical and recreational use. Of the over 70 phytocannabinoids in marijuana, Δ9-tetrahydrocannabinol (Δ9THC), cannabidiol (CBD) and cannibinol are the three main constituents. Both marijuana and tobacco smoking induce cytochrome P450 (CYP) 1A2 through activation of the aromatic hydrocarbon receptor, and the induction effect between the two products is additive. Smoking cessation is associated with rapid downregulation of CYP1A enzymes. On the basis of the estimated half-life of CYP1A2, dose reduction of CYP1A drugs may be necessary as early as the first few days after smoking cessation to prevent toxicity, especially for drugs with a narrow therapeutic index. Nicotine is a substrate of CYP2A6, which is induced by oestrogen, resulting in lower concentrations of nicotine in females than in males, especially in females taking oral contraceptives. The significant effects of CYP3A4 inducers and inhibitors on the pharmacokinetics of Δ9THC/CBD oromucosal spray suggest that CYP3A4 is the primary enzyme responsible for the metabolism of Δ9THC and CBD. Limited data also suggest that CBD may significantly inhibit CYP2C19. With the increasing use of marijuana and cannabis products, clinical studies are needed in order to determine the effects of other drugs on pharmacokinetics and pharmacodynamics.
Anzeige 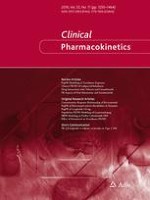 Clinical Pharmacokinetics and Pharmacodynamics of Ledipasvir/Sofosbuvir, a Fixed-Dose Combination Tablet for the Treatment of Hepatitis C

Neonatal Maturation of Paracetamol (Acetaminophen) Glucuronidation, Sulfation, and Oxidation Based on a Parent–Metabolite Population Pharmacokinetic Model