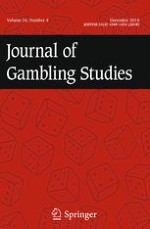 In Search of Executive Impairment in Pathological Gambling: A Neuropsychological Study on Non-treatment Seeking Gamblers

Who Are the Anonymous? Involvement and Predictors of Gamblers Anonymous Attendance Among Disordered Gamblers Presenting for Treatment

Public Awareness and Practice of Responsible Gambling in Macao