RT–survival associations were considerably stronger in our OS than in the RCTs, e.g., a hazard rate for overall survival after breast-conserving therapy of 0.57 in the OS vs 0.90 in the RCTs. The first proposed reason has limited relevance: patient populations differed considerably, but effect heterogeneity between patient groups was limited. The second reason does explain part of the difference: in the OS treatment decisions (being nonrandomized) and prospects differed with patient characteristics. Notably, patients with early recurrences or mortality are generally excluded from RCTs. Their inclusion in OSs leads to stronger treatment–outcome associations.

RCTs and OSs each have their own merits. While RCTs have their undisputed benefits, results from OSs that indicate that RT effects in early breast cancer are even stronger than those reported in RCTs should not be ignored. 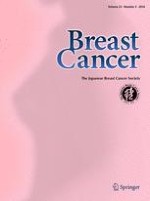 The association of cognitive fatigue with menopause, depressive symptoms, and quality of life in ambulatory breast cancer patients