Diabetes is one of the commonest chronic medical conditions amongst those aged 18–25 years. Type 1 diabetes (T1DM) predominates in this age group, but, recently, the prevalence of type 2 diabetes (T2DM) has also increased in young adults. Young people experience various social, psychological, and physiological changes, often leading to poor glycaemic control and non-engagement with health services [ 1].
Improving glycaemic control and controlling cardiovascular risk factors may reduce long-term complications [ 2]. This is particularly relevant for those who develop diabetes at a younger age due to its life-long nature and potential metabolic memory imprinting on vascular complications. We undertook a retrospective service evaluation in a large tertiary diabetes centre to assess glycaemic control, cardiovascular risk, and outpatient attendance of 18–25 years old.
Anzeige

This was a retrospective, observational, single-centre, service evaluation in a tertiary referral centre in the North West of UK with approximately 1500 individuals with T1DM and 2000 individuals with T2DM. We included individuals aged 18–25 years who attended at least one medical appointment ( n = 240).
As a service evaluation, no ethical approval was required. Data were collected from electronic records. HbA1c values were used from the most recent 12-month period at Manchester Diabetes Center. Data on weight, blood pressure (BP), and lipids were collected from the most recent visit. Non-attendance rates were calculated only after the exclusion of cancelled appointments. For each participant postcode, we obtained the English Index of Multiple Deprivation 2015 (IMD) from the Department for Communities and Local Government. The IMD is the official measure of relative deprivation for small areas in England, which ranks these areas from 1 (most deprived area) to 32,844 (least deprived area). We used IBM SPSS version 22 (IBM UK, Portsmouth) for statistical analysis.

We used the English Index of Multiple Deprivation 2015 (IMD) for each participant’s postcode from the Ministry of Housing, Communities and Local Government. (Available at: https://​www.​gov.​uk/​government/​statistics/​english-indices-of-deprivation-2015). Manchester Diabetes Centre serves an area of high social deprivation. Half of the cohort was in lowest quartile of the English Index of Multiple Deprivation (IMD ≤ 8211) and 79% were in the lower half of the distribution. Higher levels of deprivation were positively correlated with higher rates of non-attendance. ( r = 0.15, p = 0.04). However, there was no correlation between IMD and HbA1c, BMI, total, LDL cholesterol, and systolic or diastolic blood pressure. There was an association of lower levels of HDL ( r = 0.21, p = 0.002) in those with the higher levels of deprivation and a trend towards higher triglycerides ( r = 0.14, p = 0.06).

In our study, only a small proportion of young adults achieved good glycaemic control. Non-attendance was high. Overweight and obesity were common with approximately half of the cohort having a BMI > 25 kg/m 2. One-third had a TC > 5 mmol/L and one-fifth had LDL-cholesterol > 3 mmol/L. A combination of poor glycaemia, obesity, and dyslipidaemia can contribute to avoidable microvascular and macrovascular complications and poor long-term health outcomes.
Anzeige
The UK National paediatric diabetes audit 2015/16 reported similar HbA1c levels in 20–24 years old: mean HbA1c; men: 69 mmol/mol; women: 84 mmol/mol [ 3]. However, this report included only 26 individuals in that age range. Our study is considerably larger ( n = 240) and, therefore, provides more precision in the estimate of glucose control. McKnight et al. published an international comparison of glycaemic control in T1DM in three age groups [ 4]. They reported a median HbA1c of 76 mmol/mol (9.1%) in 15–24 years old in England and Wales ( n = 20,939). The USA Type 1 diabetes exchange investigators also evaluated HbA1c data in 2867 individuals aged 18–25 years [ 5]. Mean HbA1c was 8.7% compared to 9.0% this study.
Ours is the first study in the UK to report HbA1c, cardio-metabolic risk factors, and attendance in 18–25 years old specifically. Our findings may be generalizable to the other UK centers. Key limitation is the single-center retrospective nature of study. Other limitations include lack of information about rates of hypoglycaemia, hospital admissions due to diabetic ketoacidosis, and information about education provided to participants.
Our data highlight poor glycaemic control regardless of insulin delivery method, high rates of non-attendance, and other adverse cardio-metabolic risk factors among 18–25 years old with diabetes. There is an urgent need to further research the underlying reasons for these observations with a view to improve care and engagement with young adults who may benefit from new service delivery models.

For this type of study formal consent is not required.
Open AccessThis article is distributed under the terms of the Creative Commons Attribution 4.0 International License ( http://​creativecommons.​org/​licenses/​by/​4.​0/​), which permits unrestricted use, distribution, and reproduction in any medium, provided you give appropriate credit to the original author(s) and the source, provide a link to the Creative Commons license, and indicate if changes were made. 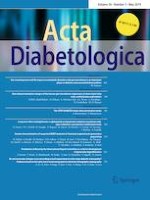 Our second genome and the impact on metabolic disorders: why gut microbiome is an important player in diabetes and associated abnormalities