We observed significantly increased average serum albumin levels and higher expression of green fluorescent protein (GFP), matrix metalloproteinase 9 (MMP9), and proliferating cell nuclear antigen in the livers of group A. We observed MMP9/GFP double-positive cells in the cirrhotic livers. A significant decrease in the liver fibrosis areas was observed in group A. Splenectomy enhanced the repopulation of bone marrow cells into the cirrhotic liver and improved the liver microenvironment via expression of MMP9 secreted from repopulating GFP-positive cells. Next, we performed a clinical trial to compare the effect of splenectomy on the efficacy of ABMi therapy. Cirrhotic patients who underwent splenectomy before ABMi therapy tended to have a greater improvement in liver function.

ABMi therapy with splenectomy may be an effective therapeutic modality for cirrhosis. 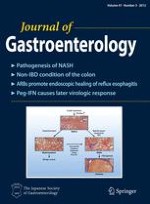 Inflammation and fibrogenesis in steatohepatitis

Shall we use endoscopic submucosal dissection for every gastric neoplasia?