Portal assisted minimally invasive total hip arthroplasty without dislocation of the femoral head with preservation of the hip capsule and the external rotators in the lateral decubitus position for rapid recovery with the option of expandability to a mini posterior or classic posterolateral approach at any time.

Lateral decubitus position, skin incision of 6–10 cm from the tip of the greater trochanter in line with the femoral axis, spread gluteus maximus, using the interval between the piriformis tendon posterior and gluteus minimus/medius muscle anterior, incision of the capsule, remove bone of the lateral neck and head, intramedullary reaming and broaching of the femur, osteotomy of the femoral neck with the femoral broach left in situ, remove the femoral head, preparation of the acetabulum using a cannula posterior of the femur, cup impaction and implantation of the inlay, trial modular neck and head, reposition, test of leg length, impingement and stability, x‑ray, implantation of the definitive components, closure of the capsule, standard wound closure.

Full weight bearing as possible, no restrictions of postoperative movement.

The first 150 patients were operated from January 2016 to July 2017 without leg length discrepancy more than 5 mm; one transfusion was needed. There were two subluxations, one wound dehiscence and one femoral diaphyseal fracture 4 weeks after surgery. There was no radiological loosening of the components after a mean of 16 months. 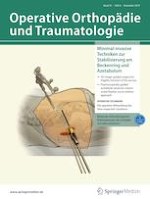 3D image-guided surgery for fragility fractures of the sacrum