A vascular reconstruction computed tomography prospective series of 113 patients was analyzed. The inferior mesenteric artery (IMA) branching pattern according to Latarjet’s classification (Type I, separate LCA origin, Type II, fan-shaped branching pattern) and the distances between the IMA and the LCA origins and between the LCA and the Inferior mesenteric vein (IMV) at the inferior border of the pancreas were measured.

Left colic artery preservation is highly feasible at its origin in more than two-thirds of cases due to the separate origin. The addition of a high IMV ligation increases the risk of damage to the LCA at the inferior border of the pancreas because the distance to the IMV is less than 20 mm in two-thirds of cases. 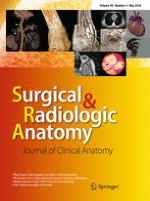 Mallet finger: a simulation and analysis of hyperflexion versus hyperextension injuries

Marked lateral deviation of the phrenic nerve due to variant origin and course of the thyrocervical trunk: a cadaveric study

Comment on: “The role of white matter dissection technique in modern neuroimaging: can neuroradiologists benefit from its use?”