Over the past decade, several motivational models have been proposed to explain the role of motives in gambling disorder. In the model captured by the four-factor Gambling Motives Questionnaire Financial (GMQ-F), gamblers are described as being primarily motivated to gamble for ‘coping’, ‘enhancement’, ‘social’, and ‘financial’ reasons. Although this model has received significant empirical support; to date, research assessing the role of motives in gambling disorder has been primarily cross-sectional in nature. Thus, the extent to which gambling motives remain stable over time has yet to be explored. In the current study, the stability versus fluidity of self-assessed gambling motives was investigated using the Quinte Longitudinal Study, a longitudinal dataset of gambling behaviour collected over 5 years. Gambling motives of 2795 gamblers were examined over all five annual assessments. The total proportion of gamblers who stayed in the same primary motive category across each of the 5 consecutive assessments was 22%, indicating substantial fluidity in category membership. Substantial movement between categories was seen for each GMQ-F group, as well as an additional group of non-classified motives. Logistic regression analyses suggest that greater resistance to gambling fallacies significantly predicted stability between the baseline assessment and a follow-up 1 year later, but gambling severity did not. Potential limitations in the study design and opportunities for future research are discussed. 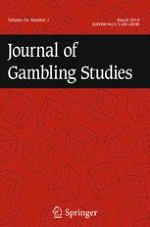 Understanding the Relationship Between Subjective Wellbeing and Gambling Behavior