Glaucoma is one of the most common neurodegenerative conditions in ophthalmology. Optic nerve damage in course of glaucoma is most often caused by excessive intraocular pressure. Ocular ischaemia caused by circulatory disorders, for example in the course of a long-term arterial hypertension and nocturnal arterial pressure drops, both spontaneous and caused by hypotensives, is considered an equally important cause of that multifactorial condition. Those data suggest that an optimal hypotensive drug for patients with hypertension and concomitant glaucoma should not only reduce the intraocular pressure, but also improve ocular micro-circulation. In search for that type of drug, some hope is associated with novel β-adrenolytics — carvedilol or nebivolol, agents improving microcirculation by blocking α-adrenergic receptors and by stimulating nitrogen oxide synthesis, respectively, and reducing intraocular pressure. Their microcirculation-improving effect distinguishes those two drugs from majority of β-adrenolytics, that generally deteriorate peripheral blood flow.
Aqueous is produced by the ciliary apparatus in the posterior eye chamber by active secretion of sodium ions and hydrocarbons, ultrafiltration, and passive diffusion. Active secretion ensures production of approximately 80–90 % of volume of aqueous. The produced fluid flows into the anterior chamber, and leaves the eyeball using one of three ways: mostly via the trabeculum of the so-called filtration angle contained between the iris and cornea, via the choroid–sclera pathway and through vessels of the iris [ 1].
Anzeige
A significant role in regulation of aqueous secretion is played by receptors of the sympathetic system. Alpha 1A- and alpha 1B-adrenergic receptors are located in the iris, ciliary body, pupil dilator muscle, and retina of albino rabbits. Beta-adrenergic receptors are located in the ciliary body epithelium, suprascleral vein walls, and papillary sphincter. In rabbit eye, pupillary sphincter β-adrenergic receptors prevail, whereas muscarin receptors prevail in primates. Beta receptors were also discovered in epithelium of conjunctiva and cornea in rabbit’s eye, as well as in epithelium of iris, lens, choroid, and external muscles of the eyeball, and in the retina — similarly to humans [ 2].
Vascular system is similar in the human and rabbit eyeball. It is composed of two systems of arteries: ciliary (supplying blood to the choroid) and retinal. They are interconnected [ 3]. Both systems separate from the ocular artery, originating in the internal carotid artery. The most significant role in regulation of function of the ocular vascular system is played by α- and β-adrenergic receptors.
The L-arginine-NO system plays a role in physiological and pathological processes of the eyeball, and also in regulation of intraocular pressure (IOP) and ocular blood flow. NO was observed to play a very important role in diastole of blood vessels in all parts of the vascular membrane (iris, ciliary body, choroid), and also in the retina and eye adnexa vessels in rabbits. NO participates also in regulation of blood flow through the optic disc [ 4].
A study involving local or intra-aqueous administration of various NO donors to eyeballs of healthy rabbits indicated that increased activity of the L-arginine/NO/cGMP system causes reduction of IOP comparable to the effect of commonly used anti-glaucoma medications [ 5].
Anzeige
Elevated intraocular pressure and abnormal circulation (low arterial blood pressure and vascular regulation disorders) are considered main risk factors of glaucoma [ 6].
Incidence of arterial hypertension and glaucoma increases with age. Therefore, in elderly people the risk of coexistence of glaucoma and arterial hypertension is high. In patients with arterial hypertension and iatrogenic nocturnal drops of arterial pressure, it was demonstrated that reduced volume of blood reaching the optic disc is associated with glaucoma-induced injury of the optic disc [ 7].
Studies indicated that increased loss of visual field caused by glaucoma is associated with excessive reduction of arterial blood pressure during sleep [ 8]. Nocturnal reduction of arterial pressure by as much as 20 % was also observed in as much as 92 % of glaucoma patients, and in only 8 % of healthy subjects [ 9]. A correlation between the open-angle glaucoma and existence of impaired blood flow in retinal and extrabulbar circulation was demonstrated in clinical trials [ 10]. Blood flow in optic nerve vessels in patients with primary open angle glaucoma is 29 % lower than in healthy subjects [ 11]. An effect of alterations of arterial pressure, nocturnal hypotony, vessel ageing on progression of open-angle glaucoma was confirmed [ 10].
In ophthalmology, in glaucoma therapy, a group of non-selective antagonists of β-adrenergic receptors is one of two main groups of drugs used for reduction of intraocular pressure.
The purpose of the study was to evaluate an effect of selected β-adrenergic receptor antagonists: propranolol, nebivolol, and carvedilol, presenting various mechanisms of action, on intraocular pressure and blood flow in rabbit’s ocular vessel.

The search for drugs that could not only reduce intraocular pressure, but also have some additional properties, for example: a favorable effect on vascular flow, is a long one. Nipradilol - β- and α 1-adrenolytic and NO donor, used for glaucoma therapy in Japan, may be an example. It has been demonstrated that the drug causes diastole of retinal blood vessels. Researchers believe that this effect is a result of both α 1-adrenolitic activity and of nitrous oxide released following administration of nipradilol [ 12].
Nebivolol and carvedilol are both drugs commonly used in therapy of arterial hypertension, having a diastolic effect on blood vessels. However, available literature provides no information about a possible effect of nebivolol and carvedilol on ocular blood flow. Their diastolic effect on microcirculation vessels beyond the eyeball is well-documented.
Dog studies have allowed observation of coronary vessels diastole with nebivolol. That effect was eliminated by previous administration of NO synthase inhibitor (L-NMMA) [ 13]. Those observations have been confirmed in humans. Other authors have studied effects of chronic nebivolol and atenolol administration on function of epithelium and NO release. Intensification of the vasodilating effect was found following administration of acetylcholine in patients on nebivolol, contrary to patients on atenolol. A weaker L-NMMA (nitrous oxide synthase inhibitor) vasoconstricting effect was demonstrated in the group receiving nebivolol (14).
Experiments carried out on animals and on a group of patients with freshly diagnosed arterial hypertension confirmed the superiority of nebivolol in relation to the risk of impotence as an side-effect of hypotensive therapy, compared to older β-adrenolytics, such as atenolol and metoprolol [ 14, 15].
An effect of the nitroergic system on regulation of ocular blood flow has been studied recently. A role of that system in maintenance of vascular tension and in NO-mediated vasodilating effect in the eyeball had been confirmed previously in animal studies, including rabbits, and in humans [ 16].
Some researchers had previously been of the opinion that NO-releasing drugs or compounds are contraindicated in glaucoma. Reduced IOP following a systemic administration of NOS (methyl ester of N-nitro-L-arginine) inhibitors, caused by systole of ciliary body vessels in rabbits has been demonstrated (17). More recent studies indicate that increased NO concentration causes reduction of IOP comparable to that caused by standard anti-glaucoma medications [ 4, 5, 17].
Carvedilol increases epithelium-dependent diastole of coronary vessels, reduces vascular resistance, causes an epithelium-dependent diastole of arterioles, and improves flow in coronary microcirculation [ 18].
Beta-adrenolytics possessing an additional vasidilating effect, such as nebivolol or carvedilol, are also recommended for therapy of peripheral vascular conditions, including obliterative atheromatosis of lower limbs or Reynaud’s syndrome.
Completed studies of orally administered drugs may suggest that for patients with arterial hypertension and concomitant glaucoma associated with increased IOP, carvedilol or nebivolol may be favourable, because those drugs reduce not only the systemic blood pressure but also intraocular blood pressure.
That difference in IOP, measured by different tonometers, is a result of structural differences between rabbit and human eye, and of the fact that the Icare-VET tonometer was specifically designed for measurements in animals — and differences between rabbit and human eyes were accounted for in its case. These observations are consistent with a few scientific reports of significantly higher IOP values. These differences are explained by higher (compared to applanation tonometers) effect of corneal thickness on the result of a measurement with the Icare method [ 19].
Experiments demonstrated usefulness of Doppler Laser Blood Flow Monitor MBD3 for studies on rabbits’ eyes. According to the available bibliography and information obtained from the manufacturer, studies of retinal and choroidal vascular flow are innovative, and no one has attempted them before. The equipment has been used for examination of blood flow in the posterior segment of an eye in rats only [ 20].
As far as we know, this is the first study of nebivolol and carvedilol in the context of their possible use in therapy of glaucoma.
Obtained results suggest necessity of further clinical trials on nebivolol and carvedilol effect on IOP and blood flow following topical administration into the conjunctival sack. The additional improvement of blood flow is a favorable effect, because it targets the second (after increased IOP) cause of glaucoma — reduced vascular flow.

The authors declare no conflict of interest. The research was not presented at a conference.
Open Access This article is distributed under the terms of the Creative Commons Attribution License which permits any use, distribution, and reproduction in any medium, provided the original author(s) and the source are credited. 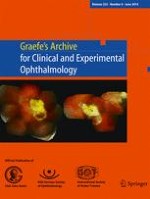