When a sudden death occurs during a minor surgical intervention, it may require a careful and extensive postmortem investigation. One such case concerns a 61-year-old male patient affected by Peyronie’s disease, who died suddenly during a corporoplasty procedure. Autopsy and histologic examinations showed a massive bilateral pulmonary micro-embolism brought on by periprostatic venous plexus thrombosis. The cause of death was attributed to intraoperative fatal pulmonary micro-embolism. Pulmonary thromboembolism is a major cause of death and is known to be a possible complication of surgery. Nevertheless, the periprostatic venous plexus is an unusual site of thrombosis, as it has been demonstrated that the majority of emboli originate in the legs. In this case, the embolism was massive and fatal and occurred during a minor surgical procedure, even though the patient was not at risk for venous thromboembolism, nor did he have a significant past medical history. 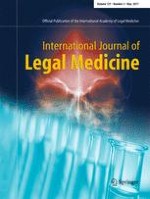 Of pigs and men—comparing the development of Calliphora vicina (Diptera: Calliphoridae) on human and porcine tissue