Due to lower complication rates in comparison to central venous catheter (CVC) arteriovenous fistulas (AVFs) are now the preferred hemodialysis access. Recommendations for the first access cannulation range from 6 to 12 weeks, which could lead to temporary or even permanent preference for CVC while awaiting the maturation of the newly created AVF. The aim of this study was to evaluate the influence of first cannulation of AVFs on primary (PP) and secondary (SP) patency rates in children on hemodialysis (HD).

This was a retrospective cohort study of 42 pediatric patients with a median age of 14 (range 7–17) years. At the time of surgical AVF creation 21 patients (end-stage renal disease) were still on HD via CVC or peritoneal catheter, while 21 were pre-emptive with initiation of HD expected within a few weeks. All patients received an AVF by the same experienced surgeon between February 1993 and May 2014. Primary failure (PF) was defined as the inability to use the AVF even once due to absent maturation or occlusion within 4 weeks after creation. PP was defined as the interval from time of access placement to any intervention designed to maintain or reestablish patency, to access thrombosis or the time of measurement of patency, while SP was defined as the total lifespan from creation to access abandonment, end of follow-up or loss.

The findings suggest that cannulation of AVF within 30 days after surgical creation reduces PP, while SP may be influenced less by time until cannulation. We also found no significant differences in PP after maturing periods of >45 days. 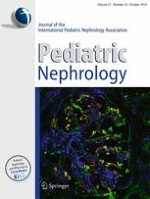 Heat shock proteins in the kidney

Comment on: World Kidney Day 2016: averting the legacy of kidney disease—focus on childhood